One of the longest-established food festivals in Wales

In 2018 Narberth Food Festival celebrated the 20th birthday of our annual food-lovers’ event. Not only one of the longest-established food festivals in Wales; but also ranked as the friendliest, Narberth Food Festival was back and buzzing on Narberth’s Town Moor this September. With entertainment, guest chefs, workshops, masterclasses and children’s activities added to the mix alongside food, glorious food on over 50 stalls, you can see why Narberth Food Festival is such a great event for foodies, fun-lovers and families alike.

Festival chair Colin Russell has been a committee member since the first event in the Queens Hall in 1999, which featured the making of a Pembrokeshire paella, Trinidadian cookery sessions and a food-themed art exhibition. Said Colin, “It’s been an enjoyable and fulfilling journey since those early days. Along the way, we’ve had so much help and goodwill from so many chefs, stallholders and volunteers that we can’t possibly name them all. Not to mention the thousands upon thousands of visitors who have traveled from near and far to Narberth for the festival weekend – on one occasion, arriving on site by helicopter! We base our success on a foundation of food, drink, music and entertainment, with free entry and activities for children. This was the vision of the first committee and so it has continued, giving our visitors the friendliest food experience in Wales.”

The two-day festival is staged on Narberth’s Town Moor. The festival takes place in a full-boarded marquee with catering stalls, the music stage and the ever-popular licensed bar on the former primary school playground.

The finest food from Pembrokeshire and Welsh producers features high on the offerings from festival stallholders, with old favourites sharing the marquee with some exciting newcomers. Amongst them this year were five start-up businesses being given bursaries by the festival committee to make their debut at the festival, with support from Welsh Government funding. These include Parc y Dderwen, near Llangolman, where Lauren and Phil specialise in fermented foods, which have gained a huge following for their gut-friendly benefits.

Parc y Dderwen also introduced festival-goers to the wonderful world of fermented vegetables when they delivered one of the festival workshops in the Masterclass Tent. Also running workshops were Eccentric Gin, Penderyn Whisky and forager Matt Powell, while local cook and writer, Vic North, showed a trio of ways to preserve fish. And there was a chance to blow a carrot clarinet or pound some pumpkin percussion at vegetable musical instrument workshops over the road in the Span Arts building. Span Arts teamed up with electronic musician Andy Wheddon for these DigiVeg one-day sessions.

Top Welsh chef Bryn Williams, proprietor of Odette’s restaurant in Primrose Hill, London, headlined in the festival’s Food Theatre. He and Matt Powell the Forager also featured in a Restaurant Confidential conversation with Welsh food writer, broadcaster and restaurateur, Simon Wright. There was plenty of variety on the Food Theatre programme, with Welsh food writer and cook Sarah Philpott creating easy one-pot vegan meals and Vic North demonstrating quick fish suppers. There were seasonal and ethical Greek flavours from Lia Moutselou, while Allister Barsby from the Grove of Narberth and festival favourite, Ludo Dieumegard from the Harbourmaster at Aberaeron cooked up a storm with his infectious, enthusiastic energy in the kitchen.

Meanwhile, Narberth’s own songbird, Jodie Marie was amongst a tasty line-up on the music stage, where Saint City Jazz Band, Carmarthen Ukeleles and the legendary Bob Fish, with Holly Robinson, were also amongst the acts performing. The beat spilled out on to the street on Saturday afternoon with Samba Doc in the High Street. Back by popular demand was the festival’s walkabout entertainment, with a surprise around every corner from acts, including the delectable comedy cake ladies, the French Fancies and a surprise VIC (Very Important Chef) – did you spot him..?!

No Narberth Food Festival would be complete without its curtain-raiser – Friday’s Paul Davey Education Day, where it’s take-over time in the marquee for local primary schoolchildren to enjoy food-themed activities. This year pupils from Narberth, Templeton and Tavernspite schools joined us for a host of activities – sausage making with butcher Andrew Rees, pasta making with chef Orsola Muscia, yoga with Amelia from Big Play, food inspired poetry with Emma from Narberth Museum, arts with Lynn from Oriel Q, butter making with Calon Wen and finding out about hedgerow habitats with West Wales Biodiversity.

Narberth Food Festival is a not-for-profit event, run entirely by volunteers, and sponsored by a number of local businesses and organisations. 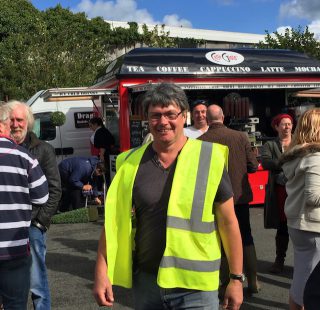